I had written a whole bunch last night about Urban Exploration as a form of modern archeology and anthropology. I had written about the marginalization of Korean Shamanism. Somehow all those words from yesterday didn’t save correctly, so I must start from scratch. D’OH!

For me, Urban Exploration is a way to look into people’s lives and make observations from my discoveries to share with you, dear reader. I have learned quite a deal about Korean society and history by rummaging through abandoned buildings. It was in the Shaman Hoarder’s House where I was first introduced to talismans called bujeok (부적/符籍) and Korean Shamanism (known in Korean as musok 무속/ 巫俗). Exploring the sad, yet fascinating house was a peek into a part of Korea that most Koreans don’t want foreigners to see. Korean Shamanism has been marginalized for over 600 years, dating back to the Joseon Period. It’s no wonder why the folk religion is disorganized and fragmented. The general public dismisses it as witchcraft or superstition. Yet those who reject it publically might attend a gut (굿) or ritual in private. There are no sacred texts, everything learned about the spirits and practices are passed down orally from teacher to student. There is no governing body or a holy leader to unite followers as a group.  Also, it doesn’t help that being a Shaman is technically illegal.

Despite being legality issues, Shamans still operate and serve people’s needs, albeit in a more roundabout manner. Manshin (만신/万神), or shamans offer services out of their house but will travel to others to perform.  Some shamans are only noticeable by a sign with a 卍, while others transform their homes to resemble a Buddhist temple. Buddhism and Korean Shamanism share similar iconography and at times, mix together. The Mountain Spirit ( sanshin 산신/山神), The Seven Stars (Chilseong 칠성/七星) and The Lonely Saint (dokseong 독성/獨聖) are all spirits revered by Buddhists and Shamans. You will see portraits of the “Holy Trinity” in Buddhist halls as well as where Shamans practice their craft.  You will often see a shaman calling their house a hermitage (am/암/庵),  or even temple (sa/사/寺). This brings us to today’s feature of three houses that used to be sacred places where shamans used to live and work. 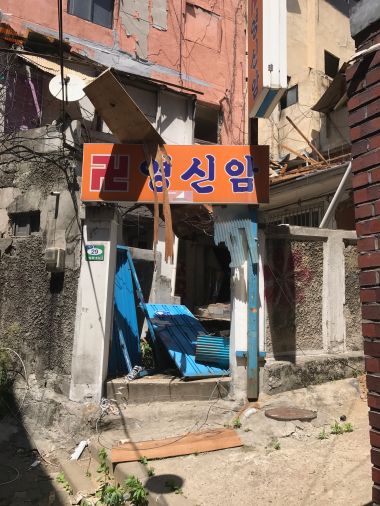 This hermitage was located in Mapo-gu, Yeomni-dong, in Seoul. It was cleared out to make room for what I assume is more high-rise apartments. If you go there now, all that remains is a giant dirt crater. The picture on the left was taken in October 2016 on one of my first visits to the neighborhood, it was around this time fellow explorers, and I discovered the Yellow Building.  The last photo was shot in May 2017 when the demolition of the area was progressing.  There was not much left behind, but I think the inside shows a good representation of the mixture of Buddhism and Shamanism. Inside, we see the former alter decorated with wallpaper motif that is similar to what you would see at a temple. 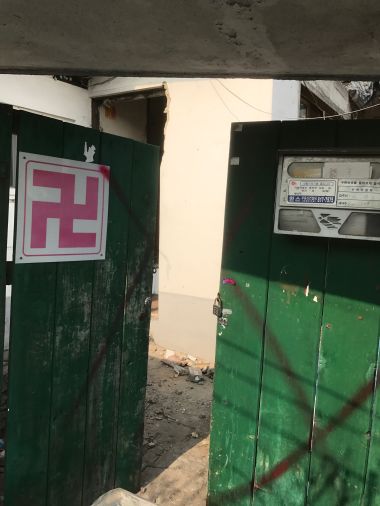 So Won Am was discovered in Bamgol Moon Village.  Again, not much was left beside some talismans and a chart used for palm reading. It was in this house I found the most colorful amulet I’ve ever seen. Most talisman I’ve come across are on yellow paper with red ink. 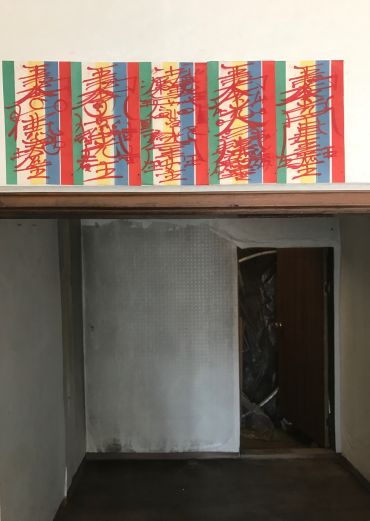 Blue Dragon Hermitage was found in Seodaemun-gu, Namgajwa(2)-dong. What a find! Besides the stunning tree that illuminated beside the grime, I saw pictures of the former shaman and her family! This is the only time I have come across photographic evidence of a shaman herself. But, first, I was greeted by a tiger!

I also came across a sizeable collection of talismans, not as many as the Shaman Hoarder’s House, but still a lot. Most of them began to fade, which leads me to believe that this Blue Dragon Hermitage was vacant for a significant amount of time.

…and here are some other artifacts found during my only time to the Blue Dragon Hermitage. The neighborhood was completely wiped out before I could revisit the house. 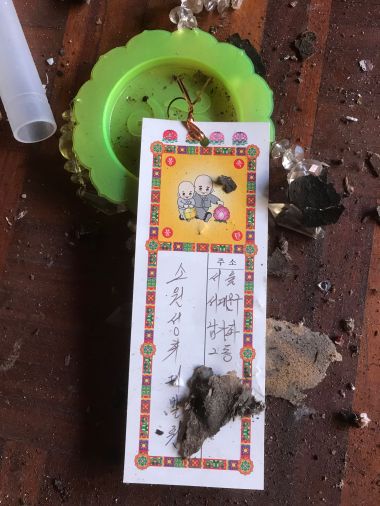 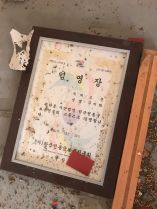