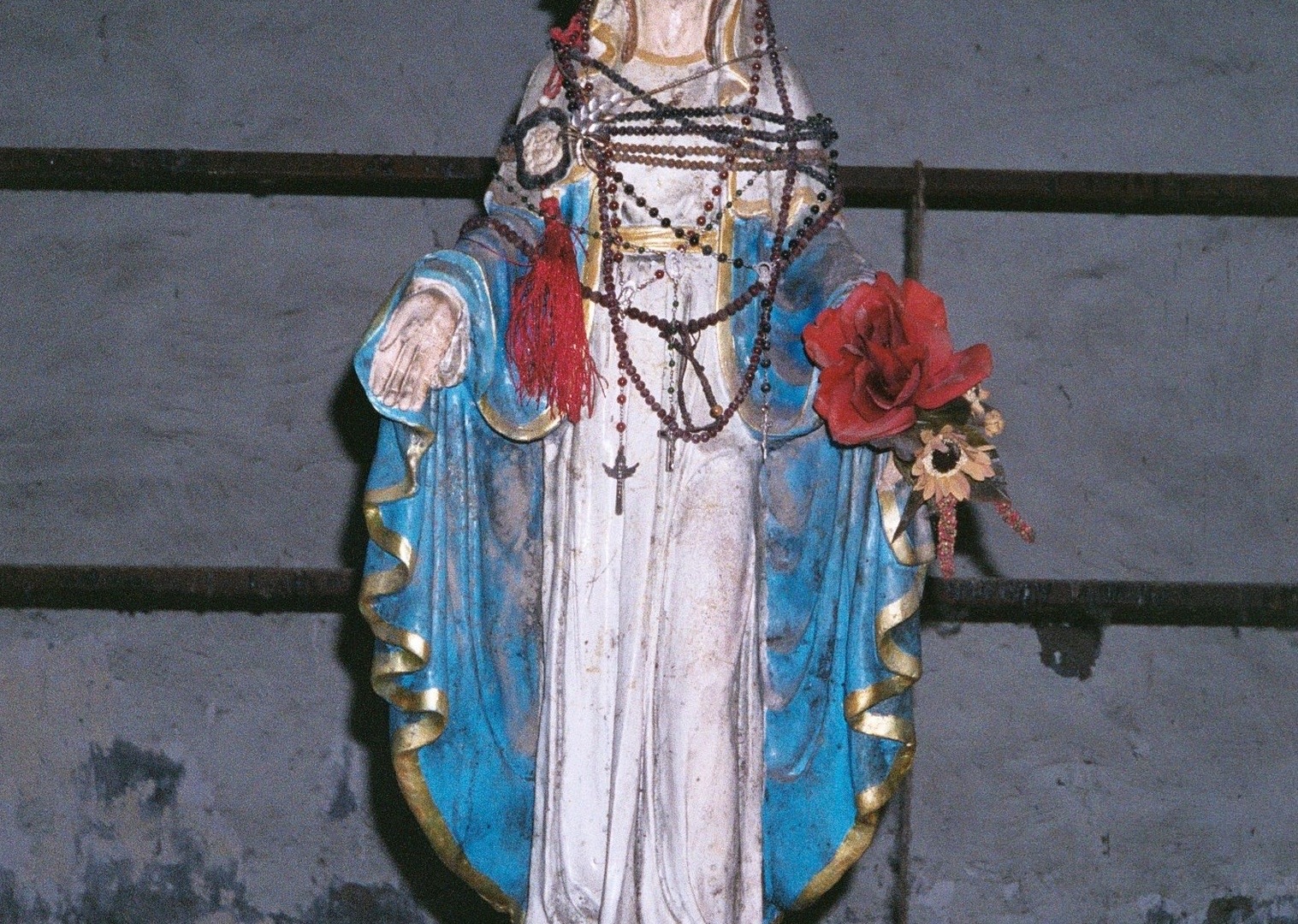 The Virgin Mary greeted us as we entered the infamous Tat Tak School through the old auditorium. It was startling in the way you sometimes accidentally scare yourself glancing your image in an unexpected mirror. Or coming across an unanticipated trio of mannequins when I explored an abandoned university.  The recent typhoon had knocked down flora, and more conveniently, the fence so no scaling was necessary! Even though climbing into difficult locations (potentially) makes for good stories, I am more of a fan of the easy entry. The only obstacle that day was the humidity and bugs before we reached the well-adorned, open arms of Mary. She was protected by several rosary strands and a few crucifixes as if to ward off an evil presence. OR was she placed there to protect the community which has seen a fair amount of tragedy over the last two centuries.

I was able to gather a few tidbits from simple internet research. The village in which the school is located has a tragic history.  First, they resisted the British efforts to evict them from their land, which led to mass causalities. Second, the Japanese invaded in 1941 and caused a lot of death, which explains the graveyard that lays next to the school. These unfortunate historic events are passed around from generation to generation along with the spooky tales that took place after the school was abandoned in 1998.  I won’t retell them here, but a simple Google (or Bing) search will lead you to myths of suicides, ghosts, and possessions.

The closures of long abandoned buildings like Tat Tak School tends to lean towards the mundane. Korea’s Gonjiam Psychiatric Hospital had numerous dark stories of neglect and death that led to its closure. In reality, the placed closed to unsanitary conditions, fleeing the country as the got worse. I will venture a guess that the Tat Tak School has a similar, mundane reason for its demise. Humans, however, are drawn in by a compelling story. Stories that involve scandal, suicide, murder and the supernatural are more memorable. 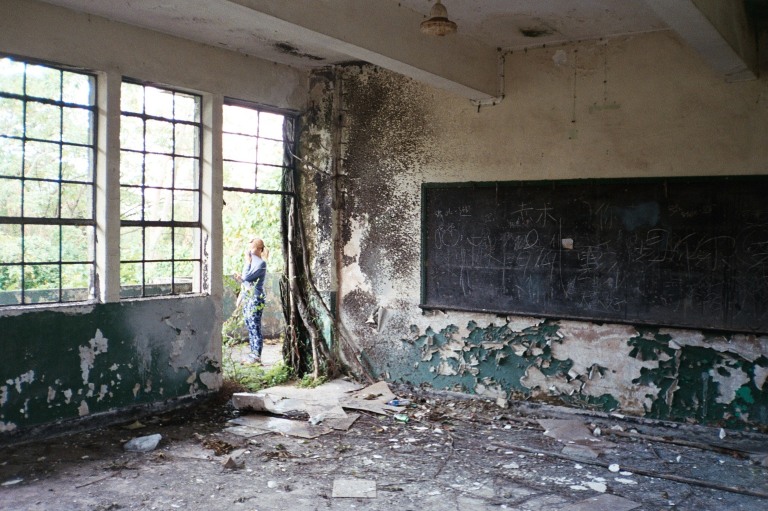 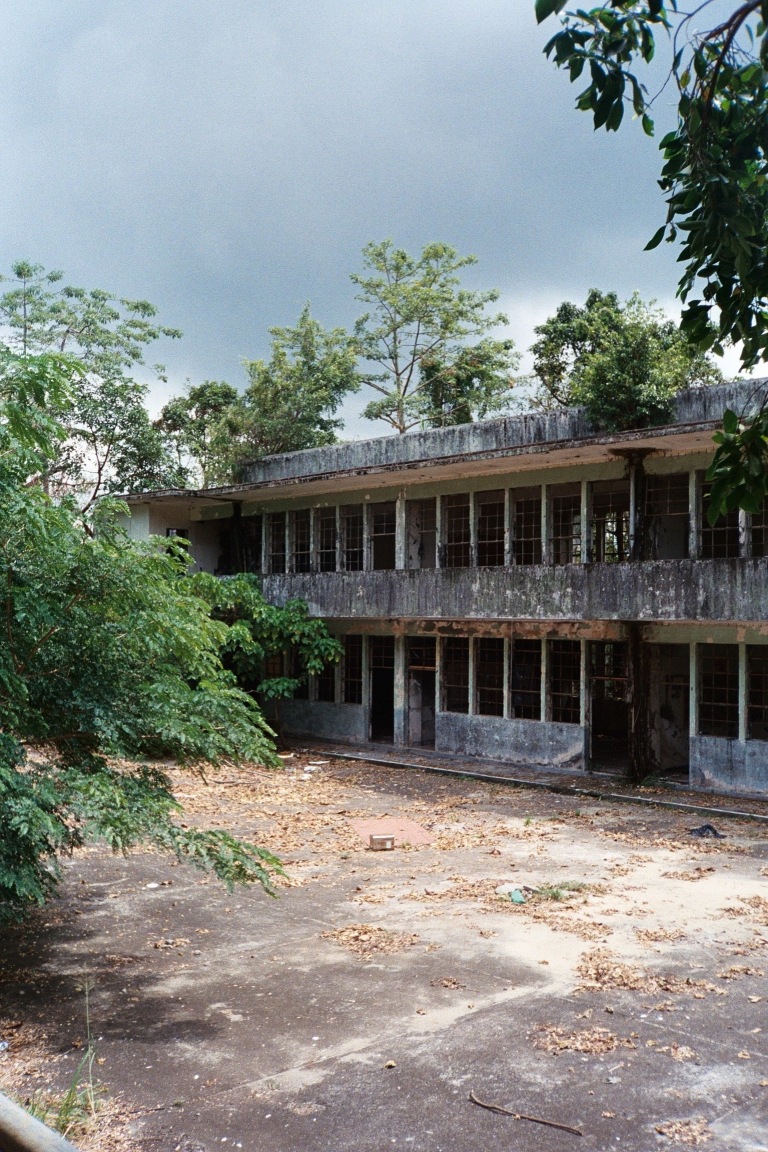 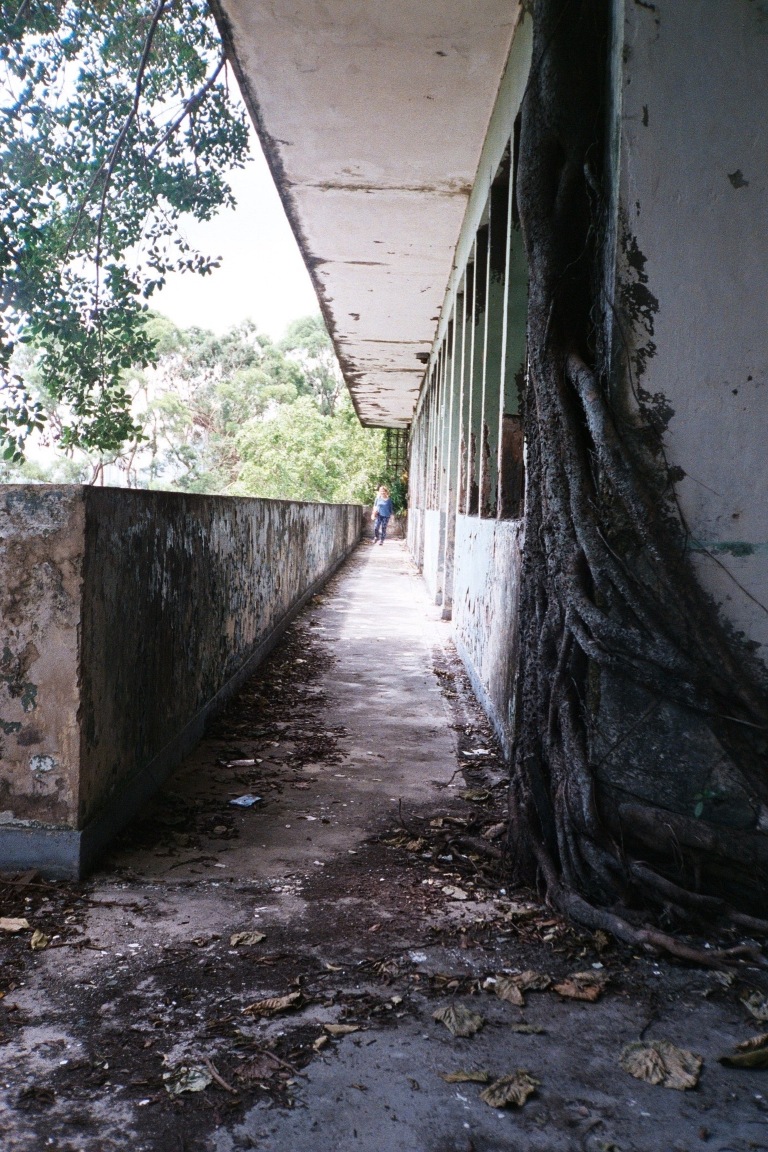 I shot a lot of rolls of film that day. The building itself is captivating to walk around. Trees attached themselves to corners, plant life growing in the concrete cracks received my full attention.  I went to the darkest place I could to reload, which happened to be the bathroom. Later that night, while researching about the school it dawned upon me that I was changing film where it is said a horrific event took place.  Upon further reflection, that first gander upon Mary was more frightening than any story read up the school.